The historical character of Thessaloniki is undoubtedly linked to its Byzantine life.
The walls and extant inscriptions record the tumultuous history of the city. The walled city and its monuments could reasonably be described as an open museum.
From the 7th to the 10th centuries, notwithstanding all the problems that the Byzantine Empire would face with the West, the Arabs, the Slavs, the Bulgarians and the Byzantine Iconoclasm, Thessaloniki continued to develop in all ways, often playing a leading role, thus demonstrating its great importance and position within the structure of the state.

The Christianisation of the Slavs by the Byzantines was an important fact that marked not only that era but the subsequent centuries as well.

The brothers Cyril and Methodius, who were born in Thessaloniki, carried out their missionary work among the Slavs.
The sacking of the city by the Normans in 1185 and its occupation by the Latins for two decades after 1204 briefly suspended but did not stop its cultural growth. Artistic and literary production flourished during the Komnenian period and reached its peak during the Palaeologan era. The turn towards classical Greek education, with the study of ancient texts, highlighted aspects of humanism and led to the Palaeologan Renaissance of literature and art of that period. However, important theological and social controversies had taken place meanwhile, such as the Hesychast strife and the Zealot movement that threw the city into turmoil.
The Byzantine metropolis contains a large number of extant devotional monuments.
Each neighbourhood retains its Byzantine or post-Byzantine monument, elements of other times, when the city was the Symvasilevousa (co-reigning or co-capital city) of a first powerful and then declining Byzantine Empire, or later the centre of an Ottoman-occupied Balkan peninsula. The city was fortunate enough to preserve mainly the monuments of its glorious religious past. 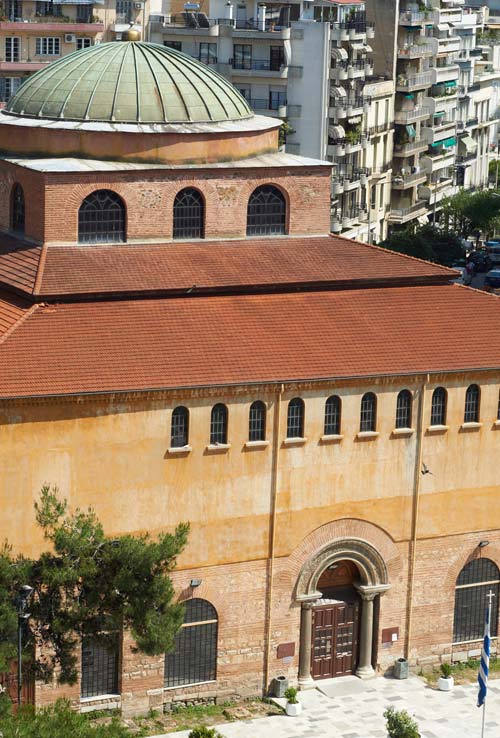