Kapani is the oldest open public market of Thessaloniki, located in the heart of the traditional city center. Market shops include fresh produce, spices, olives, fish, meat, traditional coffee shops, bakeries, sweets and loukoumi shops, tavernas, meze (small plates) and ouzeri restaurants, clothes and more. The streets, shops and restaurants are regularly full of both city residents and tourists throughout the year. Much of the market is on pedestrian streets, and several are covered. Many of the shops have been family owned for two or three generations.

Kapani agora is near the other traditional markets of the city:

Around the square, which lies next to Aristotelous Square and Kapani market, are several restaurants frequented by locals, college students and tourists. The streets around Athonos host traditional small shops that offer spices, food products, hand made straw items and small furniture. The area is also becoming a home to the small shops of local jewelry, clothing and other craft designers.

Its construction started in 1922 and finished in 1930 by architect Eli Modiano. Eli came from a renowned Jewish (Sephardic) family of Thessaloniki, and studied architecture in Paris. The building resembles some Parisian markets. The market hosts produce, cheese, meat and fish shops, mainly at its street-side areas. Inside, there are both traditional and new tavernas, restaurants and bars. 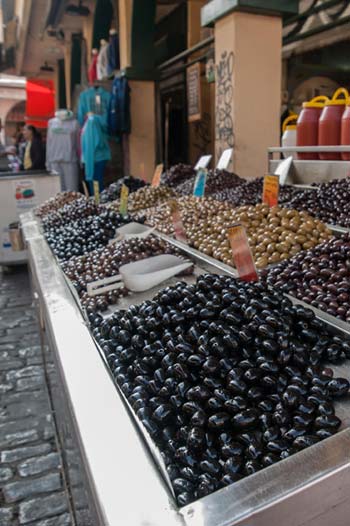